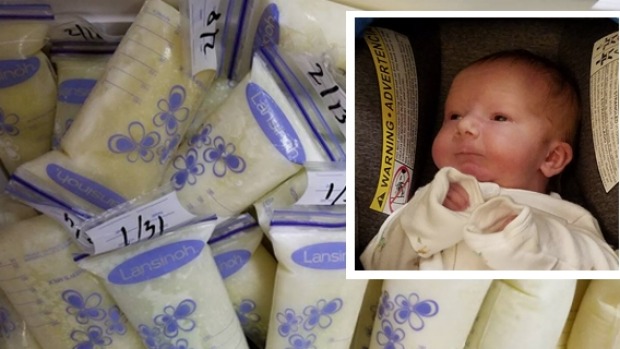 A grieving mother has continued to pump breast milk after her newborn son’s death, donating the milk to help other babies in need.

Utah mum Nicura Thompson held her baby boy, Colton, as he died in her arms at just six weeks of age.

“There are no words to explain holding your child as they struggle to breathe and they take their last breath,” Ms Thompson told TODAY. “There’s no greater pain.”

Her beautiful little boy was diagnosed with DiGeorge syndrome, a chromosomal disorder that can cause heart defects, developmental delay and cleft palate, among other symptoms. Baby Colton had seven heart defects.

After a week in hospital, Colton arrived home with his mum, his dad Zachary, and proud big brothers, Logan, 8, Charlie, 7, and Kallan, 4.

“He was perfect,” Ms Thompson said. “They said treat him like a normal baby. He was supposed to come home and grow and gain some weight.”

Just weeks after his birth, however, Colton experienced difficulty breathing and suffered cardiac arrest. Tragically, 20 days later, he was taken off life support.

“When he became sick, it was a huge shock to us,” Ms Thompson. “We knew his life would be short. We just didn’t expect it to be that short.”

In a raw Facebook post about their grief, Ms Thompson wrote, “Our hearts were torn to pieces the day we lost [Colton]. Our world stopped. We are learning to live without him and teaching our hearts that he is no longer here.

“Our brains understand, but the heart never will, so we have to live around our hearts and work with it. ”

As she grieved the loss of her baby boy, Ms Thompson decided that she wanted to honour Colton’s memory by donating her breast milk to help other fragile babies, an idea that came to her two days before his death.

“It literally dawned on me at that moment: this milk can go to other babies,” she said. “I had about 1500 ounces (45L) at the hospital in their milk room. I was like, ‘I’m going to donate all of that.'”

The 28-year-old pumped milk on the day of Colton’s death – and on the day of his funeral, too. She continued expressing up to four times a day, and has now donated over 130L.

“I wanted to do something in his name, considering this was his milk,” she said. “It felt like I was keeping his memory alive through breast milk donation and helping others.”

Ms Thompson drops her breast milk to McKay-Dee Hospital in Ogden, where it’s then shipped to Colorado for processing and pasteurisation.

And while the selfless gesture hasn’t been easy, the idea that Colton’s milk is helping others has been a source of comfort in her grief.

“It was hard at first because I had to overcome the fact that that milk is supposed to go to my baby, but he’s not here any more.

“I thought it would bring sadness, but it really doesn’t,” she said, adding that knowing her milk is going to children who “really need it” gives her a sense of relief.

“I knew how important breast milk was to sick babies, including my son,” she said. “It’s liquid gold, and these babies need it so desperately.”

For now, Ms Thompson has set herself a goal of donating around 150L – a number she may even surpass.