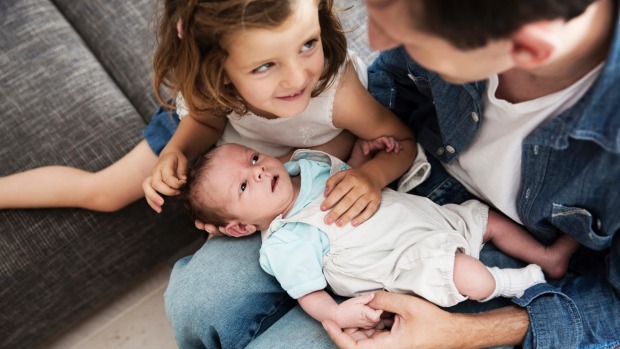 Dads are not babysitters and mums should not call them

an equal parent1 gender-specific conversations1 opposite sex1
I was organising to go out for dinner with my mother’s group a few months ago, and as it was our first evening out, we...

I was organising to go out for dinner with my mother’s group a few months ago, and as it was our first evening out, we were all giggling about staying up late and drinking wine.

One of the mums piped up, “I’ll have to get his dad to babysit”. Some of the mothers laughed and nodded in agreement – which I must admit I was a part of – while others were quick to point out that dads aren’t babysitters. After the conversation that arose from this innocent comment, I am now adamantly a part of the latter group.

What do we mean when we ask if the dads are babysitting? What are we actually implying?

A baby sitter is used to refer to someone who looks after your baby. Seems logical enough, right? But do we ever call a mother a “baby sitter”? Not for their own children, of course not. They are a parent – they look after their OWN child. They feed them. They clean and change them. They entertain and play with them. These are the normal roles and responsibilities that come with being a parent.

So when we ask our spouse or our partner (or our child’s other parent) to “baby sit”, we are actually removing their role and responsibility to look after their own child. Do we only see it as the ‘mother’s job’ to look after the children? NO.

Mums constantly complain about their partner’s lack of support or their refusal to be a “hands-on” parent. So why then, do we talk about dad’s as babysitters? Are we reflecting our partner’s relationship with the children onto the experience, or are we just perpetuating this idea of dads as lazy, uncooperative and uninvolved?

I’m surrounded by a fair few traditionalists – those who vehemently believe it is the wife’s responsibility to child-rear, while the husband brings home the bacon (so to speak). The idea of dads looking after children is usually the topic of hilarious memes, ridicule and some very bad jokes. We almost celebrate the fact that dads are viewed as the incompetent and uninterested parents, rather than praise the eager, involved and hands-on ones.

This is 100 percent his choice, and it is to do with the fact that he’d like to spend more time with our son.My husband has recently made the decision to cut down his working days from full time to 4 days part-time.

I am going away for a weekend soon, and my husband is actually – can you believe it – EXCITED about spending some one-on-one time with our son. You know all the things those dad-memes suggest that dads don’t want to do, like changing nappies or feeding the baby? My husband WANTS to do all the hands-on, nitty-gritty parenting stuff. Is he a keeper or what? Yes, yes he is. But he is also not the only dad. I am hearing stories of a lot more dads who are eagerly involved in their child/ren’s lives, and we as mothers  need to stop being surprised about that and support their involvement.

With a seeming increase in dads participating in the home life, what can we do – as wives and mums – about these stereotypical images of lazy, good-for-nothing dads?

1. Encourage your partner/husband/baby daddy to his face

Sometimes dads make silly mistakes – hey, don’t we all? Us mums are just as prone (if not MORE so) to doing silly stuff with or around the kids. Instead of honing in on those things, offer encouraging words and support to him when he tries to get involved in your child/ren’s lives (and if it isn’t all that often, make a HUGE deal of it when he does – he’ll get the hint that this is encouraged!).

2. Praise you partner/husband/baby daddy to others

It can be so easy to fall into the trap of complaining or whining about someone when everyone else is doing it. Next time you’re in a group of mums, don’t join in on the partner/husband bashing conversation. Either leave the conversation, or share something amazing and “hands-on” that they did instead . We need to start normalising conversations where dads are praised rather than berated.

Heck, we all do it – I even CREATED one for my Facebook page. By jumping on this bandwagon, everyone knows that you are sharing it because you can relate to it, or agree with it.

As mums, we always share nice, fluffy, emotional memes about how mothers have amazing bonds with their kids , so why don’t we share those types of posts about dads?

At the end of the day, you are an equal parent with your husband/partner/baby daddy.

Each parent has a role and responsibility to play in their child’s life, and we should be encouraging and supporting that to flourish, rather than add to the perception of ignorance.