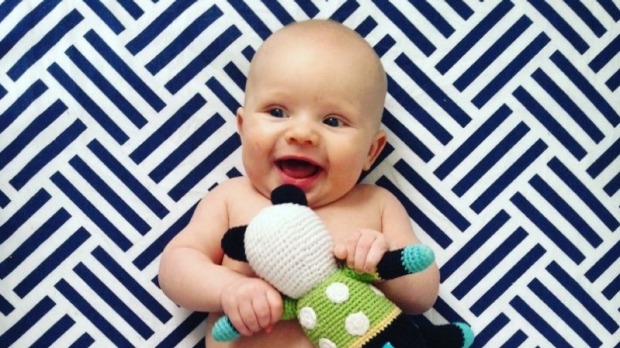 a mutual distaste for baby name hashtags1 avoid posting photographs of our son online1 gradual development1
In hindsight, the parenting proclamations we make before having kids are often amusing. Pre-baby, my husband and I had in-depth discussions about sleep schedules,...

In hindsight, the parenting proclamations we make before having kids are often amusing.

Pre-baby, my husband and I had in-depth discussions about sleep schedules, discipline and diet. We also decided, based on privacy concerns and a mutual distaste for baby name hashtags, to avoid posting photographs of our son online.

Yet within a few months of his birth, Oliver had a personal Instagram account boasting a small but enthusiastic fan base – and nearly 200 posts.

I’m 32, part of a generation that is caught between a childhood that was documented with film and the digital world my son inhabits. I feel guilty about my attachment to my iPhone, about spending too much time on social media and about what might be perceived as oversharing. I also feel nostalgia for the tangible photographs and albums of my youth.

I grew up seeing my mother through the lens of her Olympus 35mm camera. She’d worked professionally as a photographer before I was born, and her camera was like an extra limb. A basement bathroom served as her darkroom, and I’d sneak in to watch her work under the glow of red lights, transforming strips of film into vibrant colour photographs. Sometimes she’d slip them into the plastic sleeves of a photo album, or frame them, or send them to relatives across the country. Sometimes they’d just go into a box that gathered dust on a shelf in a closet.

Fast-forward 20-something years, past the ascendancies of the digital camera, camera phones and platforms such as Flickr, Facebook and Instagram. It was late August, and I was 42 weeks pregnant when I reluctantly, and somewhat blearily, started a private Instagram account for my son. I wanted to share a picture of my enormous bump with close friends and family, but not with the acquaintances, strangers and spammers on my personal accounts. I invited a few people to follow, with the intention of posting the occasional baby photo to satisfy the cravings of those who cared to see.

Two days later came a photo of Oliver wrapped in a receiving blanket, just a few minutes old, still red and a bit bloody from the effort of entering the world. Later that day, a photo of his impossibly tiny form nestled in my arms, my hair a mess but a look of true contentment on my face. The next day, Oliver peering into the camera, his skin tinged orange, after we’d found out he was jaundiced and we’d have to stay in the hospital an extra day.

After each post, we received likes, comments and encouragement from our little group of followers, and I was surprised by how much the feedback meant to me. I began opening up more, writing long captions to share the stories and emotions behind each candid snapshot. As the weeks passed, I captured his first smiles, his first cautious tastes of food and the gradual development of his little personality. I liberally documented even seemingly insignificant moments that felt special, and shared them freely. I felt safe in the semiprivate space I’d created in this public sphere.

There were times I felt self-conscious, noting how other young parents I knew posted far less frequently, or not at all. And on the other end of the spectrum, there were a few whose never-ending flow of baby pictures bordered on overwhelming. Where did I fall on the spectrum?

I was nursing Oliver to sleep one night when I realised that I didn’t care. Sitting in his darkened nursery, I scrolled back through the feed, marvelling at how far my son has come in just a few months – and how far I’ve come, too. I realised that, inadvertently, I’ve been creating a real and intimate portrait of my experience of early motherhood. I love being able to share this with the people I care about, but more than that, I cherish this narrative for myself and my young family. We may not be able to flip through its pages, but this is our first official family album.

Every now and then, I pull out my DSLR for some “real” photographs of Oliver. I even order a few favourite prints occasionally, frame some and mail the rest to his grandparents. Still, I know that he’s likely to feel sometimes like he’s growing up looking at me through the lens of an iPhone camera. And that’s okay.

I don’t know what happened to most of those photo albums from my youth. And I know that this Instagram account is likely to get lost in the digital shuffle toward bigger and better things before too long. But for this moment in my life as a new mother, this silly little social media space is something close to sacred. I’ll keep oversharing, like a lot of other proud parents I know. And if you don’t like it? You know where to find the “unfollow” button.