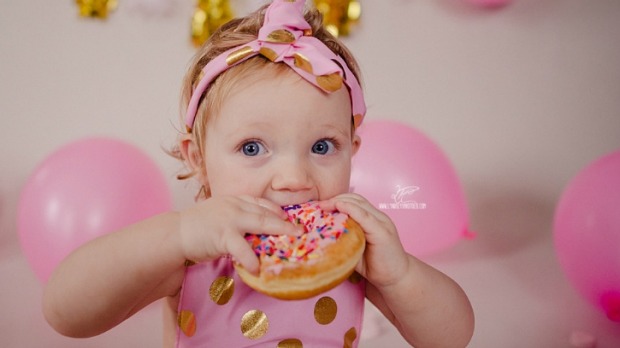 We’ve already shown you the genius of baby Stella Ogden and her taco smash photo shoot. Now the same photographer, Lyndsey’s PhotoCo, has done it again – this time with donuts and avocados.

Getting creative with food for a baby’s first year photos is something Lyndsey excels at, and she’s gaining a lot of recognition for it.

And while we always love a good cake smash here at Essential Baby, Lyndsey says babies that young don’t always know what to do when confronted with a gigantic cake.

Speaking to Scary Mommy, she said, “I’d say 75+ per cent of the babies I’ve done cake smashes for have hated them. They’re either scared of it, don’t like the texture, don’t like the taste, or just flat out want nothing to do with it. A lot of them have never seen or eaten cake or icing before so it’s new and scary for them.” It’s true, donuts are much less scary and can be easily picked up and munched on. A lot of babies are also familiar with the taste and look of avocados, so it’s logical the idea of a finger food photo shoot would work well with our littlest ones.