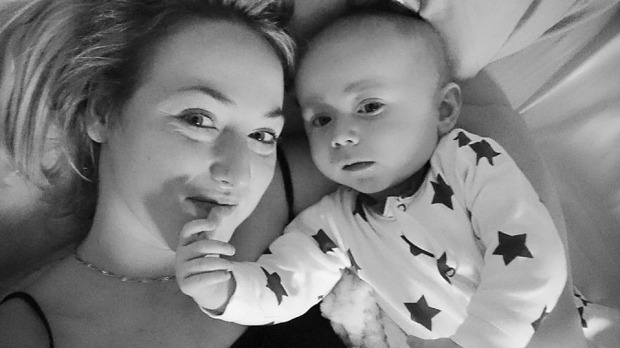 triple negative breast cancer1 breast symptom1
A 26-year-old mum has credited her baby boy with saving her life after his sudden refusal to breastfeed on one side, resulted in her...

A 26-year-old mum has credited her baby boy with saving her life after his sudden refusal to breastfeed on one side, resulted in her being diagnosed with breast cancer.

Sarah Boyle, of Staffordshire, UK, told BBC News that when her son, Teddy, was six months old, he “became very distressed” when she tried to feed him on her right breast. Initially believing he might have something wrong with his neck, Ms Boyle attempted to feed her son in various positions over the next few weeks – to no avail.

It was then that the young mum requested that a cyst, previously determined to be benign in 2013, be re-scanned. The cyst, she noted, had become more “rigid” and painful and her breast had changed shape, around the time Teddy became distressed during feeding.

“I remember it was 11:55am on 16th November,” Ms Boyle said of the moment she received the diagnosis.

And, she says, it’s because of her little boy that she’s now receiving treatment. Currently halfway through chemotherapy, Ms Boyle will undergo a double mastectomy and a reconstruction.

“Nobody can say for certain whether it was Teddy,” she says, ” but I know that if it wasn’t for him then this time next year it could’ve been completely different if I’d listened to doctors, but instead I listened to Teddy.”

Ms Boyle believes that the milk from her right breast tasted different – leading to her son’s behaviour change.

“He became very unhappy and even hit out,” she said. “For an eight-month baby to push his mother away was really heartbreaking.”

Catherine Priestley, clinical nurse specialist at Breast Cancer Care, said Ms Boyle was one of a “small number” of women who have reported their babies no longer feeding from a breast where cancer was later detected.

“While there are many reasons why a baby may stop feeding, getting any new breast changes checked out must be top of the list,” she said.

“We found a tenth of younger women diagnosed with breast cancer are pregnant or breastfeeding when they first notice their breast symptom.”

Two years ago, Texas mum, Shakti Dalal, experienced something very similar when her newborn daughter, Laila, suddenly stopped feeding on one side. Later diagnosed with stage 3 breast cancer, Ms Dala told local media, “My oncologist, Dr. Frankie Holmes, said that cancer cells probably produce a bitter taste, so when she was tasting the milk she probably didn’t like the taste of it.”

“[Laila] knew something was wrong,” Dalal said of her baby girl. “She’s my angel and she found the cancer.”