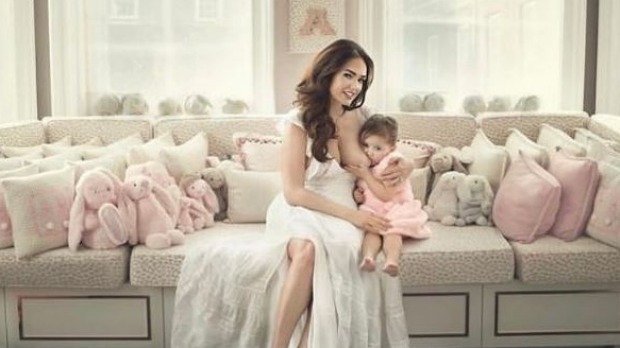 powerful demonstration of love and nurturing1 a significant backlash1 natural loving1
When British model and TV personality Tamara Ecclestone shared a beautiful photograph of herself breastfeeding her two-year old daughter Sophia, she intended to promote...

When British model and TV personality Tamara Ecclestone shared a beautiful photograph of herself breastfeeding her two-year old daughter Sophia, she intended to promote breastfeeding as a “powerful demonstration of love and nurturing.”

“It has become so normal to hide. I want to take that normal and toss it,” she added in the caption.

But, the image of mother and daughter, which was taken during a professional photo shoot, received a very mixed response from followers with some calling the photograph offensive.

Speaking on Good Morning Britain Ecclestone hit back at critics saying that she hopes that in the future breastfeeding mums don’t have to face so much negativity and questioning.

She also addressed one of the more common criticisms – the fact that her two year old is “still” breastfeeding.

“I really feel that my decision to let her wean herself and breastfeed until she no longer wants it is the right choice for me and for her,” she said.

“There are so many children that still have bottles, dummies, comforters and no-one questions that and I wouldn’t dream of it.

“If someone wants to give their baby a bottle at night then that’s entirely their decision so I just don’t understand, when you are trying to do the best for your baby, why people are just trying to pick holes in it and look for the bad.”

The 32-year- old mum also said that while Sophia isn’t on the breast all day she “clearly still wants it.”

“She’s not going to go to university and be still on my nipple so they all at some point are done and the natural age of weaning apparently is about the age of four and half.

While there was a significant backlash, Ecclestone also received a lot of praise and support in the comments.

“Absolutely beautiful…best for baby best for you, thank you for posting the most natural loving thing to do for your baby and bringing back normal,” wrote one person.

Another mum commented: “Beautiful capture – you’re a role model! My daughter is 14 months and I never thought I would still be breastfeeding her, but she loves it, it’s good for her and we bond.

“To be honest I didn’t agree with breastfeeding for so long before, but I suppose it’s something you only understand when you become a mother, and in fact this is the most natural thing in the world. Finally my breast have a proper purpose.”

But amongst the discussion there was another theme that left followers feeling conflicted. The cushions.

“The only absurd thing in this picture is the amount of cushions!,” said one person.

Another agreed: “Surely the only crime here, is having such a ridiculous number of cushions on a sofa!”