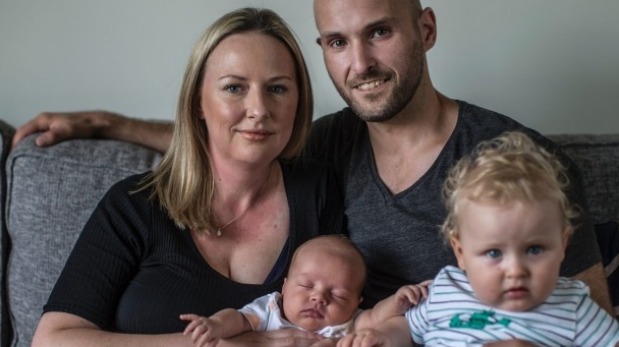 newborn intensive care1 IVF attempts1 premature birth1
A couple have given birth to two babies within 10 months after thinking it may be impossible for them to have children. Kimberley and Jason Smylie, from Kaiapoi...

A couple have given birth to two babies within 10 months after thinking it may be impossible for them to have children.

Jack was born prematurely on January 10, 2016, at the newborn intensive care unit (NICU) in Christchurch.

And then, just 12 weeks later, the couple fell pregnant again.

“We were really shocked,” Kimberley said. “We didn’t think we could have babies naturally after the IVF attempts with Jack so we were really surprised, but excited too.

“I think it took a few months for me to get my head around it.”

The couple’s midwife warned them after having Jack that the IVF treatment could make it possible to become pregnant again shortly after.

“But never in a million years did I think this was something that could actually happen,” Kimberley said.

“I always say it’s like buy one, get one free – we spent so much money to get Jack, so Sam was like a freebie.”

Due to his premature birth, Sam has some breathing issues while feeding, but he should grow out of it, the couple said.

Looking after two babies has been hard Kimberley said, especially now that Jason has returned to work.

“Jack is still so dependant because he’s not walking yet. So there is a lot of multi-tasking involved. We run a really tight routine.”

Because both babies required NICU care in Christchurch a number of the staff recognised the couple.

“We’d been there only 10 months prior, so there were a few surprised faces to see us back again so soon. We started the year in NICU and we ended the year there,” Jason said.

“Having two babies in one year has been a real adventure. People think we’re a bit crazy.”