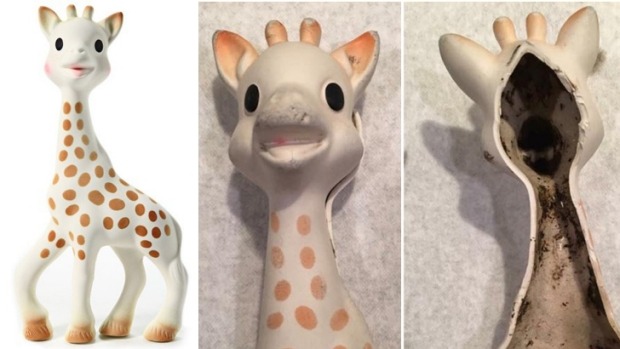 The ‘smelly, ugly mould’ is your child’s favourite chew toy

rubber toy1 a Sophie giraffe toy1 a drooly baby1
Sophie the Giraffe has been a firm favourite for well over 50 years. But while the iconic baby toy conjures up images of a...

Sophie the Giraffe has been a firm favourite for well over 50 years. But while the iconic baby toy conjures up images of a happy early childhood, the rubber toy has been hitting headlines for a very unwholesome reason: mould.

A recent Facebook post from Lewis’s Legacy Little Lives Matter shows a photo of Sophie cut in half, which reveal a coating of black mould inside.

“If you’ve got a Sophie giraffe toy then be aware they could be full of mould,” the post reads.

The mum who took the photo, paediatric dentist Dana Chianese, told Good Housekeeping that she had been recommending Sophie as a teething toy. But when she noticed that her sons’ Sophie had a musty smell she decided to investigate.

“I decided to cut into Sophie out of curiosity and discovered a science experiment living inside. Smelly, ugly mould living in my infant’s favourite chew toy!”

The mum of two says that she had been following the cleaning instructions, using hot soapy water and a damp sponge to clean the toy.

“It still hurts my heart to know that for months I allowed my babies to chew on mouldy toys,” she says.

“I no longer buy any chew toys with a hole or recommend any to my patients.”

Reviews of Sophie on Amazon also claim that the popular giraffe is a mould trap. Stephanie Oprea, from the US, wrote: “Beware. If you have a drooly baby, moisture will get in the hole and you’ll end up with mould.

“We’ve had ours for two years and the entire inside is coated with black mould.”

“As indicated on the packaging and in an explanatory leaflet inside the packaging, we recommend to clean the surface of Sophie The Giraffe with a damp cloth.

“It should not be immersed in the water nor rinsed off, to prevent water from getting inside, as she may become damaged. We thus would like to emphasise on the fact that it is important, while cleaning the product, that no water gets inside the hole,” a Vuilli spokesperson said.

The spokesperson also said that they couldn’t comment on Dana Chianese’s photo because they hadn’t been able to examine the toy.

“Please know that each complaint received is taken very seriously and that the return of the product is always asked for further examination,” the spokesperson continued.

“Furthermore, please know that the safety of children and satisfaction of their parents is our main priority.”