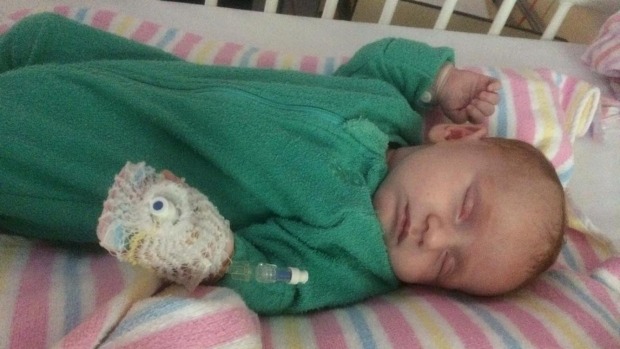 a Sydney GP1 dosage error1 query the prescription1
Jessica Brough suspected there was something wrong with her six-week-old daughter Grace when the baby refused to wake up at feeding time. Grace could...

Jessica Brough suspected there was something wrong with her six-week-old daughter Grace when the baby refused to wake up at feeding time.

Grace could not be roused from her sleep, not even when Miss Brough picked her up and touched her cheek and neck gently with a small piece of ice.

Other parents suggested Grace might simply be going through her six-week growth spurt, which was tiring her out.

Not once did Miss Brough, 24, suspect that the medication a Sydney GP had prescribed to her daughter for reflux, and which the mother-of-two was giving her daughter twice a day, was well above the dosage recommended for a baby of Grace’s age and weight.

The very medication that wa

That medication – Ranitidine, sold under the trade name Zantac and which is commonly prescribed for reflux – contains alcohol.

Miss Brough said her daughter had essentially been drunk for four days, before the dosage error was detected by an astute nurse who came to her house for a routine check on Wednesday.

“She [the nurse] called up the hospital and spoke to the paediatric registrar, and he told me to bring Grace in because she had overdosed on that medication,” Miss Brough said.

“It wasn’t until we came to the hospital and we were told what dosage she should have been on, and what she was having, and the amount of alcohol on that medication, that I started to really panic.”

Grace has now been in Campbelltown Hospital for three days.

Miss Brough, a qualified youth worker and psychology student, said doctors had told her that Grace should have been on a dosage of between 0.7 and one millilitre of the medication at a time.

Instead, the medication prescribed to Grace states that she should be given 10 millilitres, twice a day.

Miss Brough said her son, Noah, had severe reflux as a child, and she suspected her Grace was having the same problem when she took the baby to a medical centre last Saturday to see a GP she had previously consulted.

“We were pretty much in and out, given the prescription and went to the pharmacist,” she said.

“The first prescription was Zantac injections and the pharmacist kind of looked at it a bit weirdly and said, ‘We don’t actually stock that, that’s something that has to be ordered in. Are you sure that’s what the doctor wanted?’ ”

Miss Brough said she called the medical centre to query the prescription, and was told to come and pick up an amended prescription for syrup instead of injections, and she returned to the pharmacy in south-western Sydney.

“The chemist even commented. She said, ‘That’s a large dose,’ and something along the lines of, ‘Good luck getting a six-week-old to take 10 mils,’ ” Miss Brough said.

Miss Brough said she did struggle to get Grace to take the medication, but persisted for four days before the nurse’s visit.

“I actually posted on mothers’ [forums], freaking out, saying ‘What’s wrong with my baby? She’s just sooky and if she’s not sooky, we can’t wake her for feeds.’

“I would resort to putting ice on Grace’s neck and face to try to wake her up because she would not feed. Even that wouldn’t wake her. Knowing she already had weight problems, it was alarming.”

The nurse immediately became suspicious of the dosage, and called the hospital for advice. By that stage, Miss Brough said she had already given Grace nine doses of the medication.

It was unclear whether she would have any developmental problems, Miss Brough said.

“We won’t know until Grace grows and we see: OK, is she sitting up by three months? Is she walking by 12 months? Is she reaching her milestones when she should be?

“We’re going to be questioning every little thing she does from here on in. It’s going to be really stressful.”

Ms Brough said she would seek legal advice over the incident, but her priority at the moment was making sure Grace was well.

She said she understood “everyone makes mistakes”, but there was no room for error when it came to a six-week-old baby.

“These are people we put all of our trust in. You believe their word as correct. You don’t think you should double-check that,” she said.

A spokesman at the pharmacy that dispensed the prescription said: “We have taken the matter up with our insurer, and we can’t really comment any further at this stage.”

Fairfax Media has contacted the GP who prescribed the medication for a response.

The GP had not responded at the time of publication.