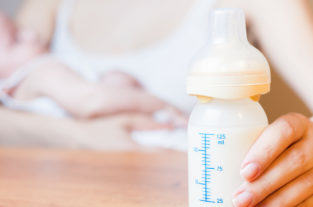 When babies are not fed breast milk, infant formula is recommended for the first twelve months of life.

Parents who bottle feed need to carefully follow manufacturer’s directions in the preparation of formula, measuring both powder and water to ensure the correct volume is achieved.

Even using product scoops between different brands is discouraged, as it’s so important for the measurements to be accurate.

Yet a study of infant feeding bottles has revealed a huge level of inaccuracy in markings used by parents to ensure the correct volume of water is used to prepare each feed.

Too much water will dilute the formula, resulting in underfeeding, while too little water can result in over-concentration of formula.

In preparing formula feeds, the water is measured first, with the powdered formula added last, before mixing, to ensure the correct mixture.

The study published in the journal of Maternal and Child Nutrition reported that Adjunct Associate-Professor Karleen Gribble from the School of Nursing and Midwifery and her colleagues purchased the entire range of infant feeding bottles available for sale in Australia. Many Baby Bottle Markings Inaccurate, Finds Study A study by Western Sydney University found more than half of infant feeding bottles have inaccurate or missing markings, sparking calls for Australia and other countries to introduce and enforce industry standards for bottles to prevent formula fed babies from becoming ill. Alarmingly, the testers discovered 20% of bottles had at least one marking that was deemed so inaccurate that it would fail to meet the requirements of the European standard: the only existing standard for bottles in the world. Markings underestimated and overestimated actual volumes by as much as 43%. A 100ml measurement was actually only 60ml, in one case. In addition, two out of five bottles were missing at least one marking for a volume that instructions for reconstituting infant formula require parents to measure. In total, 57% had either inaccurate or missing markings. “Parents using infant formula are routinely instructed to use the volume markers on the bottles to measure water, but this advice assumes that bottle volume markers are accurate,” says Associate Professor Gribble. “Unfortunately, our study has shown these markings on many popular products are either incorrect, or missing entirely.” What Can Parents Do? The researchers identified the issue as a global concern: The bottles in this study with inaccurate or missing markings were manufactured or distributed by companies from throughout the world including: Australia, Austria, Bulgaria, China, Hungary, Germany, Malaysia, New Zealand, Singapore, Thailand, UK and the USA. The importance of accurate measurement cannot be under-estimated. “We already know that parents and caregivers tend to add more powdered infant formula than is instructed, and the risk of over‐concentration is likely to be compounded when bottles over‐represent volumes,” says Associate Professor Gribble.

The study found that measuring water in tall, narrow bottles was generally more accurate than wide, squat bottles. Researchers also suggest caregivers choose infant feeding bottles that display clear volume markings commensurate with the instructions printed on the infant formula product that they are using and to test the volume markers of purchased bottles using a scale accurate to 1 g. Such scales are generally available in pharmacies and hospitals.

Why Is Accuracy So Crucial? Infant formula in powdered form is a dehydrated food product and accurate addition of water creates the correct volume of milk per feed, as recommended for the individual baby. Incorrect preparation can lead to problems. This has implications for infant health, with dehydration a severe risk, and excessive weight gain another issue. The greatest risk is for very small or premature infants who lack the capacity to deal with over‐concentration. Over concentrated infant formula can also result in constipation and exacerbate the symptoms of reflux. The health of formula fed infants is likely to adversely impacted by inaccurate volume markers on infant feeding bottles leading to infant formula reconstitution errors. On the other side, under‐concentrated infant formula could result in poor growth and development for children who aren’t receiving the required nourishment. Urgent Call For National And Global Standards “All countries should have comprehensive standards that require the testing of all volume markers as bottles can have a mixture of accurate and inaccurate volume markers. There also needs to be appropriate enforcement of these standards to ensure that babies are protected.” states Associate Professor Gribble. Regulation of the manufacture of infant feeding bottles is necessary to ensure that volume markers are accurate and adequate. Comprehensive standards should require testing of all volume markers as bottles can have a mixture of accurate and inaccurate volume markers. In addition, standards should require that markings are present for the volumes of water specified for infant formula reconstitution on the packaging of infant formula products sold in corresponding markets. Missing markings are potentially just as problematic as inaccurate ones as caregivers may seek to estimate water volume using the available markers. Consideration might be given to standardizing the volumes of water required for reconstitution of infant formula products. …