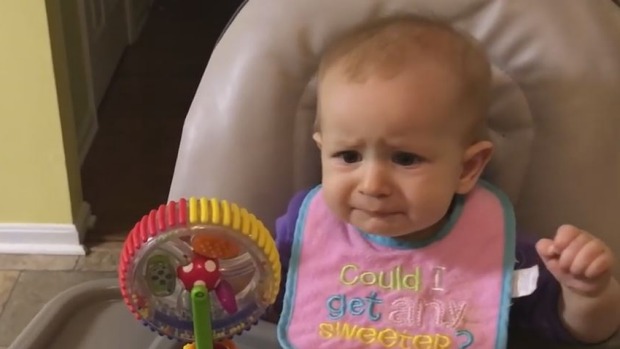 Baby tries broccoli for the first time and regrets it immediately

It’s probably fair to say that broccoli is an acquired taste. Some kids love it, and other kids … well, other kids think broccoli is something very terrible indeed.

In a hilarious YouTube clip filmed by her dad, little Hazel proves that she falls into the second category.

The clip shows an unsuspecting Hazel in her highchair ready and willing to take a bite of broccoli. But as soon as the green stuff is spooned into her mouth her expression changes from anticipation to bitter disappointment.

The adorable tot then rests her head on her hands, with a look that can only be described as despair.

Her Dad, Rob Hemmerle, can be heard commentating in the background. “Ohhh. Ohh,” he says as Hazels’s face crumples. Then “Oh man! God!” as Hazel slumps in her high chair defeated by the puréed vegetable.

The comments show that Hazel is not alone in her disgust for broccoli.

The short clip, which was posted on You Tube on November 17 has already been viewed more than 280,000 times.

“I’m … older than Hazel, but I still would react like her if I had to eat the healthy but terrible tasting broccoli,” wrote one person.

Another wrote: “That is exactly how I felt about eating broccoli for the first time too and I was way into my 20s.”

Others note that Hazel’s parents have caused their daughter permanent damage.

“She trusted you! Look how willingly she accepted the spoonful,” wrote one broccoli hater.

“And then the sense of betrayal!”