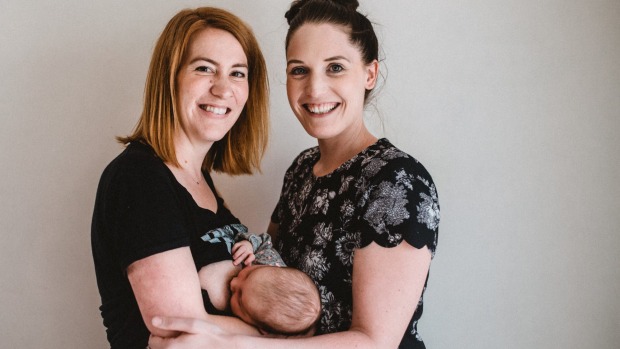 same sex couples1 experiencing pregnancy1 breastfeed your baby1
It’s a rare couple that can say they have both breastfed their baby. But for one couple, from Melbourne, it’s part of every day...

It’s a rare couple that can say they have both breastfed their baby. But for one couple, from Melbourne, it’s part of every day life.

Now Claire Eden-McIlroy, 29, and Steph Eden-McIlroy, 26, have shared some beautiful images of them taking turns to breastfeed their four-week-old daughter, LJ.

Claire said it’s normal and natural for them both to breastfeed their daughter, and that they took the photos to show how normal it is for partners to want to share the responsibility of caring for a baby.

“[It’s] something we do every day in our house and we wanted to raise awareness of same sex couples,” Claire told the Daily Mail Australia.

The new mum, who gave birth to LJ in January, said that her partner wanted to share breastfeeding as soon as she heard it was possible.

During Claire’s pregnancy, the couple worked with a private midwife who helped them understand the steps they needed to follow for Steph to be able to produce milk.

In order to produce milk despite not experiencing pregnancy, Steph used a hospital-grade breast pump to stimulate her breasts every two hours for 10 minutes at a time, even using it during the night. She also took fenugreek, a herb which is thought to stimulate prolactin, the hormone that triggers breast milk production.

“Even without carrying a child you can still nourish and feed your child from your body,” Claire said.

“It’s a way for her to bond with the baby and ease my load.”

The stunning photos were taken by birth photographer Lacey Barratt, who had put a call-out on social media asking for volunteers to pose for her Humans Uncensored project, which aims to capture the human form.

During the session Claire told Lacey that both she and Steph were breastfeeding their baby and the photographer immediately asked if she could photograph them in action.

Sharing the photos on her Instagram, Lacey captioned one image: “Can we talk about breastfeeding and same sex couples of a minute?

“Can we talk about how NORMAL this should be? Having a desire to share the responsibility with your partner is normal and POSSIBLE,” she wrote.

“Ladies, did you know, that you DO NOT have to be the birth mother in order to breastfeed? Adoptive parents, surrogacy parents, you can breastfeed your baby!”

“Same sex male couples, did you know that you can find a woman to wet nurse your baby? Have donor milk? SNS? The possibilities are endless, and should be respected as a heterosexual couple is … Equality is deserved by everyone.”